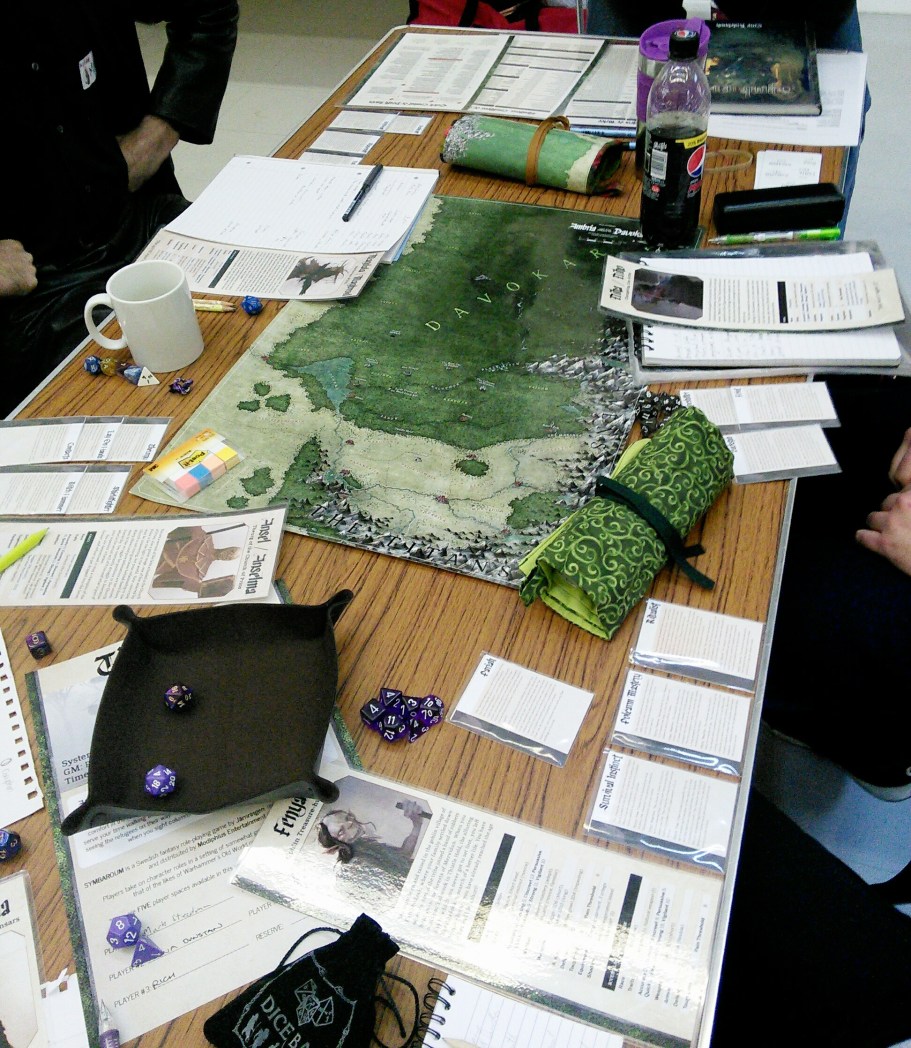 Titan Wake probably served as a rather world-shaking introduction to Symbaroum, setting a stage for destruction as the player characters witnessed the arrival of a massive force of Undead across The Titans. I started the adventure in the same place as the ones I ran before – at Camp Titan near the Mountain Pass. It just seems to be a nice spot to kick things off, as it provides a

I don’t know why I keep doing this, but I started the adventure in the same place as the adventures I have run before – at Camp Titan. The Camp was the first of its kind, where the first travelers from Alberetor rested in Ambria. It has diminished and grown as refugees have come and gone. Bandits and brigands have set to it with sword and flame. It just seems to be a nice spot to kick things off, as it provides that lead in to explain how the people traveled across the mountains from Alberetor to Ambria and why.

In previous adventure the inhabitants of Camp Titan fell to corruption, but the Queen restored the guard, the guilds supported the provisioning and more refugees arrived. In Titan Wake, the army of the enemy came and camp fell for good…

Symbaroum is a game that can handle all kinds of avenues to adventure. Titan Wake offered combat, exploration, roleplaying and massed combat. Actually, the final events relied on how the players chose to steer the game, because I’m not one for railroading, even when I only have 3 1/2 hours at a convention. In this case, Orlan took control and made a strong argument for a martial response to the thrusting assault of the dead.

Orlan had reason to fight and fight hard. He saw the soldiers at the gate of Camp Titan wearing the torn and tattered colors of the army of Alberetor. He realised that the very men he once served with, who died for their King and, later, their Queen, now returned – their purpose and potential perverted by the enemy. He could not let the land he loved die again.

Someone asked afterwards if the game had rules for massed combat, which it doesn’t (unless there’s something in one of the Swedish books). For my part, I didn’t need to run a wargame – the final battle provided a way to serve up a final spotlight for each of the characters.

We had a good mix of characters – Niho, Fenya, Orlan, Anselma and Magbrod – and some interesting dynamics. The group gelled really well right from the first encounter, saving a couple of Iron Pact elves from a dozen Gnarls. Through to the close, I made a point of keeping my attention from lingering too long on any one situation or individual. I kept the spotlight moving. Magbrod kept slipping away from the core group – serving as a scout and messenger – but that actually helped provide that player with their spotlight moments.

Overall, I’m happy with how the adventure turned out. I will write it up in the future – though there isn’t much to write up, as my notes extended to just a single sheet of A4 paper, printed on both sides. I plan to run it again this coming weekend – at Go Play Leeds – and I hope to gather more useful thoughts on any tweaks or changes needed.

As it stands, I think I need to get a good clear plan on the timelines of the adventure – which I improvised and wasn’t totally happy with. I also want to add more adversaries into the bestiary, especially Undead. Otherwise, Titan Wake feels like a solid start.